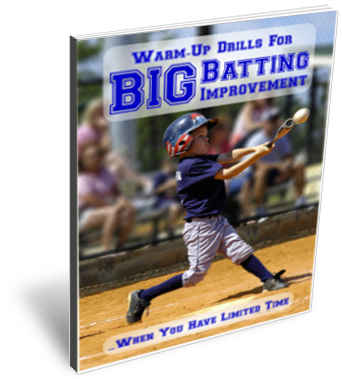 Batters in a slump? No time to fix it? Get our special drills, for rapid improvement–even if the only time you have is the warm-up time before games!

Last year, our team was in trouble. We had the best pitching and defense in the league–which gave us a lot of wins. But our batting was the pits.

And I could see, as the season was progressing, the other teams were improving their pitching and their defense. Which meant we were losing our advantage. We needed a dramatic improvement in our batting, and fast. It wasn’t fair to our young pitchers to rely on them, to try to pitch our way to victory, when our bats weren’t producing enough runs to win games.

In our league, we get a wide range of players, including some who have never played baseball. We have a total of seven practices before games begin. Once the games start, there are no more practices. So I had to come up with a solution, even though I didn’t have a practice to dedicate to it. The only time I had was the warm-up time before the games. And batting wasn’t the only thing we needed to warm up before the games.

So I did two things. First, I asked everybody to come 15 minutes earlier for warm-ups if they possibly could. Second, I put together a series of batting drills that I hoped would improve our batting in a short amount of time. These drills had to be simple, fast, and effective.

Now, another thing about our team is we had a lot of small to medium-sized players, not a lot of bulky guys. Our main rival team was heavy on big guys. They had several players in their line-up who could hit deep into the outfield. With these drills, we overcame that advantage as well, and ended up beating our rival for the championship.

It worked better than I could possibly have imagined.

I noticed an immediate improvement the very first game, and it just kept on getting better. Even a player who had never gotten a single hit the entire season got his first hit. You should have seen the smile on his face! And he kept getting hits. Another player who was near the bottom started hitting with power. Everyone started hitting better.

And what’s really great is the players enjoyed these drills! They made batting warm-ups fun and interesting. Over time, the kids developed confidence in their hitting, and felt good about making a contribution to the team. They enjoyed the game more. Who wouldn’t? It’s fun to play baseball when you’re getting hits!

Remember, the program needed to be simple, fast, and effective. There are other teaching methods that can be just as effective, but they take more time, and more individualized coaching. I didn’t have the time for those methods, when all I had was the warm-up time, and there were so many other skills to attend to.

So, I needed a way to teach all of them to see the ball, to make contact, to load and to follow through for power. Plus a way to help them with individual quirks. And that’s exactly what these drills accomplish.

The drills require some helpers, either some other parents or the kids themselves. This was easy for us, because there were always parents standing around who loved getting involved. Plus in a short time, the kids caught on, and they could help each other if need be.

And you’ll have instant access to the drill routine I used–plus three extra bonus drills–when you sign up below! Not only that, you’ll also get additional tips and insights, from time to time, into your inbox… and of course, you can opt out any time you want.