In baseball, the infield is your first line of defense. You probably won’t win a lot of games unless your infield can stop the other team from getting hits. This is especially important in youth baseball, where most of the hits are hit to the infield.

Because the infield holds so much importance, this is also where the majority of errors can be found. But if the kids are well grounded in the fundamentals, they’ll be able to cut down on these errors and really play like a solid team. 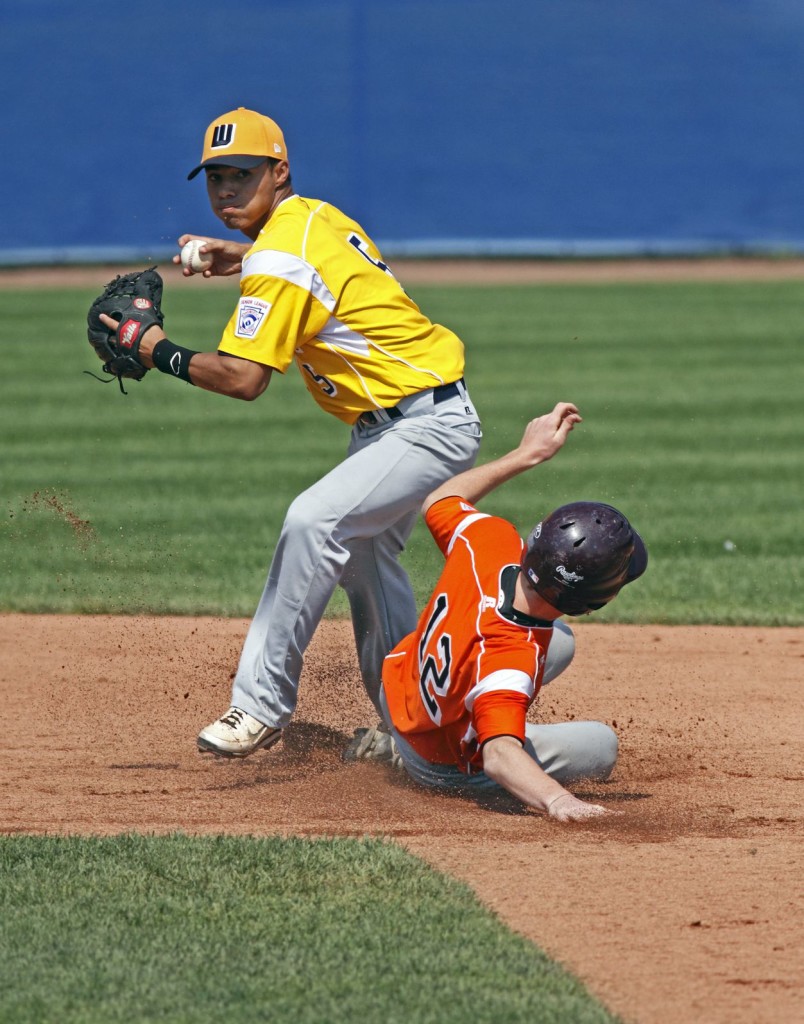 Some of the most common errors that we see in youth baseball infield play start with poor positioning. Very often, the kids don’t get into the ready position. The ready position basically means that as the pitch is being delivered and just before contact, you’re going to get onto the balls of your feet and be somewhat squatted down with knees bent, butt up in the air, and both hands out close to the ground but not touching. This position greatly helps you move quickly either to the right or left whenever the ball is coming at you. But what typically happens is you’ll see the kids either not in any ready position at all or with their hands on their knees.

So the first thing to do is to make sure that they get into the ready position. A simple way to do that is to teach them to pay attention to when the pitcher goes back to make a throw. When they see the pitcher going back, that will alert them the pitch is about to happen.  Then, just before the batter connects with the ball, they should take one or two steps forward landing on the balls of their feet in their ready position. Their knees should be bent and their hands should be in the proper position.

Another mistake involves those balls that are not hit with a lot of power, and instead kind of rolls on the ground towards you. Often times you see these kids wait for the ball to get to them instead of charging the ball down. Remember that as soon as that ball is hit, the batter will run toward first base as fast as he possibly can. So you have to get to the ball really, really quickly. And you have to be able to turn that play with a quick throw over to first base.

So we tell the kids to charge at the balls. They need to be charging toward balls that are coming at them at a slow to moderate speed instead of waiting, to save precious time and make that quick play.  It’s best to get to the ball on the first or second hop.  Errors and misplays increase if the ball takes three or more hops.

For balls that are hit a little harder, the most common mistake is our natural inclination for self-defense. Nobody wants to get in front of a hard-hit ball, but that’s where you need to be. So the kids try to catch the ball off to the side and that usually doesn’t work. You really need to get right in front of the ball in order to be able to block it and to prevent it from getting past you.

That basically means you’re on the balls of your feet, ready to go toward one direction or the other very quickly. This is done by crossing over from the opposite leg, the one farther away from the direction you’re going. That gives you the quickest jump toward where you need to go.

Of course, we can’t talk about infield without going into what happens after you catch the ball. Once the ball is caught, you need to throw it to one of the people who are on a base and that base person needs to catch it. And of course, at the youth level, there are a bunch of errors that tend to happen.

Basically, the key to making the play in the infield, actually in any position in baseball, is to release the ball quickly. One of the reasons that infielders will use smaller gloves than outfielders is because it’s much more important for the infielder to get that ball out of his glove really, really quickly. And a smaller glove helps with that. And as soon as you get that ball you have to be able to make an accurate throw.

Now another big mistake is when kids don’t spend a lot of time practicing throwing. Throwing accurately is more important than throwing quickly, because even if the runner makes it safely to first, you’re going stop him at first if your throw is accurate. If it’s wild, then that runner is probably going to end up on second base.

You want to spend a lot of time teaching the kids how to throw accurately, and that’s another subject that we can get into. First and foremost, they’ve really got to work on their throwing.

Positioning Players For Their Strengths

As far as positioning goes, the longest throw is going to be from third to first. You want the person who has the strongest arm and the most accurate throw playing third base. Second base people don’t usually have to throw that far. But they need to be really quick in order to stop balls that are hit down that side. They do also need to be accurate, of course.

Shortstop is probably going to be your best all around athlete. He’s going to cover the most ground and try to get balls hit to either left or right of him. When he turns around he’s got to be able to turn around very quickly and to very gracefully and athletically make a throw to first.

The first baseman quite often is a left-hander. He doesn’t have to be a left-hander but it helps if he is because of the general direction the balls are coming from. He needs to be a pretty good fielder of his own because there are going to be balls hit down the right field line. However, if you have an infielder who isn’t quite as fast of a runner, first base might be a good place to put him. Typically, the first baseman is going to throw to second base or to home plate. Just like the second baseman, he doesn’t make long throws. However, he still needs to be accurate.

To effectively teach playing first base, you should teach the athlete to reach out for the ball rather than waiting for it to come to him.  It’s a game of micro-seconds and getting to the ball sooner will get more outs. As part of that, for maximum stretch, he should have his right foot on the inside part of the bag if he’s a right handed thrower, and his left foot on the bag if he’s a left handed thrower. Obviously, it is a plus if this player is tall, because then he has a wider range for catching the ball with his foot on the bag.

The catcher is part of the infield as well, but his role is so specialized, I’ll cover the catcher position in a separate article.

As a parting comment, I’d like to put it out there that the kids will need to learn all the things we’ve talked about. But if the coach just continually does drills hitting the balls at them and making them throw, pretty soon they’re going to get bored.

So you need to make the whole thing fun. Fortunately, there’s lots of ways to make those infield drills fun. For one, you can make it like a competition. For another, you can keep score and pretend that there are runners on base so you can call the runners out or safe after every attempt.

Then keep tabs on how many runs can be scored against them. The kids really get into the drills if they believe there are base runners in the field. There are other drills you can do as well but the main thing is to just keep it all interesting. Learning is best when a good bit of fun is involved.