Pitching is one of the fundamentals of baseball. When you coach a baseball team in the youth level, this is one of the first things that you have to tackle. It’s important that your players know the basic principles of pitching and that they do the job right. 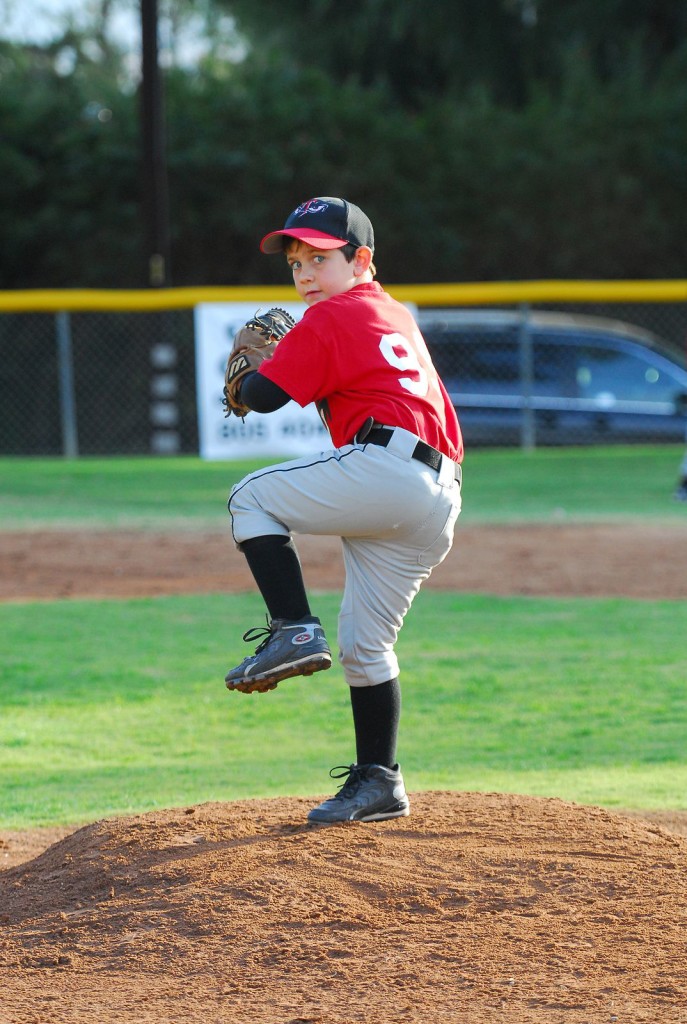 The Basic Principles of Pitching for Beginners

They need to, more or less, end up in that position where the front shoulder is facing home plate and the back shoulder is facing second base. Their back foot is going to be parallel to the pitcher’s plate. In starting them from the stretch, the easiest thing to do is have them work on an important principle: equal and opposite.

When they spread their arms–the back arm and the front arm–the two arms are going to pretty much look like mirror images of each other. This is what we mean by equal and opposite. You want the elbows up at shoulder height or above. From there we teach them how to go into the balance position.

The balance position is where you’re standing on your back leg with your back foot parallel to the pitcher’s plate, your knee is slightly bent, your front leg is lifted up so that your knee is coming up about midway in height, and your front foot is pointed downward. Your hand and your glove will be clasped in front of you, so you haven’t gone into your equal and opposite position yet.

From here you’ll go into the equal and opposite position and then you will come forward putting your front foot down and landing on the ball of your foot rather than on your heel. As you do that, your hips are going to more or less explode as your arm comes around, and you should be in a good motion right then to make a nice, straight pitch directly at home plate.

For a more experienced pitcher, if they already can pitch from the stretch, you can have them pitch from the full windup. For the full windup , you’re standing initially facing the batter rather than sideways to the batter. Then you’re going to take a step back with your left foot if you’re a right-handed pitcher. Your right foot is going to come and place itself parallel to the pitcher’s plate. Then you’re going to swivel around and be in pretty much the same position as you would be if you were pitching from the stretch, except that as you swivel around you’re going to be bringing your front leg up and your foot down.

So if you’re playing in a league at a youth level where there is no base stealing, then there’s no reason to pitch from the stretch other than it’s a simple pitch for young pitchers to learn. When you get older and there is base stealing, you have another reason to pitch from the stretch. The runner at first who wants to steal is going to look for your movement. When you make a move toward home plate they’re going to take off and try to steal second. So the less movement there is, the less time they have to steal the base.

If you’re pitching from the full windup, it takes longer for you to get into that position to pitch. As soon as the runner is on first base, most pitchers will pitch from the stretch because there’s just less movement either for them to make the pitch or for the base runner to detect when they’re going to pitch.

There are a lot of kids out there who have some really great athletic ability. In fact I know of one whose mechanics aren’t all that good, but his arm strength and his athleticism somewhat carry him through. However, that’s only going to last for so long. Sooner or later, that’s going to break down and it’s not going to work for him, because other players who are learning proper mechanics will catch up with him.

Another thing, too, is if you’re relying on arm strength alone, you’re more prone to injuries. If you’re really pitching the way you’re supposed to, your whole body is doing the pitching. You’re getting a lot of your power from your legs instead of from your arm.

It can be tricky when pitchers have to unlearn what they’ve already learned. But you just have to slow it down and start isolating some of the drills. There are a lot of different drills you can use. You have the chair drill where you’ve got your back foot up on a chair. You’ve also got some for the upper body and the lower body.

What you want to do is show them what they’re supposed to be doing and then start isolating the areas that they really need to work on, until it all becomes natural and comfortable for them to pitch with the proper mechanics. It’s usually better if you can change one aspect of their pitching at a time, and get that one piece working. It’s more risky if you have to completely redesign their pitch from scratch. That may be better to do during the off season.

The Most Important Pitch

Basically, the important thing for youth pitchers is to master the four-seam fastball. A lot of kids have been watching baseball and have their favorite pitchers, especially the closers, who come in with their fancy pitches−sliders, cutters, and all that stuff.

Keep in mind that for some pitchers, they could spend an entire season or more, just learning one pitch. It isn’t important, especially at the younger ages, to have a range of pitches. It’s most important to hit the strike zone consistently.

Once they’ve gotten that one down, the next pitch that they should do is the two-seam fastball, which is pretty much the same as the four-seam, except with a different grip. Also, it’s going to sink a little bit so it’s got slightly more movement on it than the four-seam does.

Teach them just a simple change up where you change the grip and throw it exactly like you do a fastball but a little slower. This fools the batters. If you’ve been throwing two fast balls in a row, for example, and they’ve got your timing down, when you throw the change up, you’re pretty much going to fool the batter. But again, you want to wait until the pitcher can hit the strike zone consistently before you start introducing new pitches.