Throwing to second base is an important key to winning ball games at any level, but especially at the youth level. Baseball is not just about hitting the ball and running around bases. There are plenty of aspects in this sport that oftentimes get overlooked. The catcher position is one of them.

There are two aspects to being a good catcher. Number one is being able to catch balls quickly. Being able to block balls. Making sure that nothing gets past them, or hardly ever. They are quick. Quick hands, quick gloves. But number two, and more importantly, they need to get the ball out of their mitt quickly and make an extremely accurate throw to second base with a lot of speed.

Unfortunately, most catchers at the youth level aren’t that good at throwing down to second base. That’s just how it is, more so when the kids aren’t coached well. And this is a big problem.

At the youth level, if your catcher doesn’t throw well, the opposing coach is probably going to send his runners from first base to steal second base as often as he can. So instead of a runner on first, you have a runner in scoring position. That’s a problem. 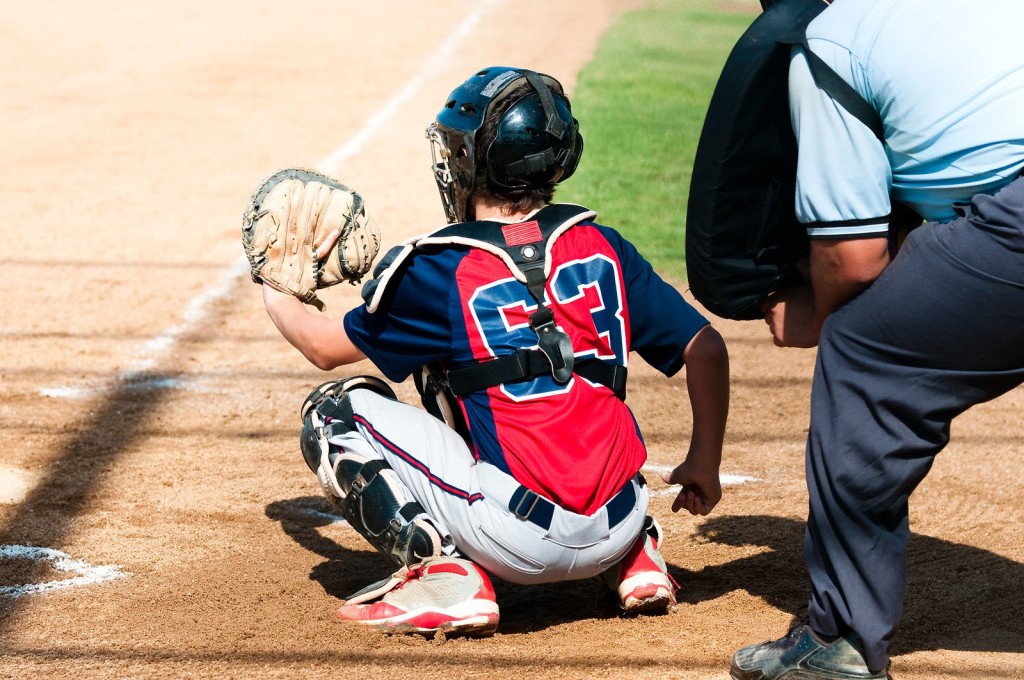 You Want a Good Catcher

The reality is it really doesn’t matter if you’re in a league that allows steals with a lead or steals without one. If the catchers are not that good, the runners are pretty much going to make it to second base safely. Heck, maybe even third! Because if they aren’t that good, there’s a very good chance that there’s going to be an overthrow, or a weak throw.

As coach in a rec league, I can tell you that I send my runners from first base with every single pitch. This is because the catchers have to prove to me that they can throw me out. If they are able to throw me out, I’m going to hold back and do less stealing. But ninety to ninety-five percent of the time, the kids are not going to make that throw.

So how do you, as a coach, teach your catchers to make that throw?

Let’s take a look at catchers in the major leagues as an example. They usually throw with a speed of ninety miles an hour. Of course we don’t expect that in youth sports. We just want the fastest, most accurate throw we can get at this level.

The first step is to teach everyone on the team how to throw. You don’t want someone learning the catcher position who isn’t already a good thrower. Next, select someone with quick reflexes and a good throwing arm.

They should be able to get the ball out of the glove quickly. They have to make a good, quick move and hop up. Then, they don’t have the luxury of time in making a full extension and throwing with their full body behind the throw. They’ve got to have a lot of upper body strength to be able to make that quick throw. And they need to be able to throw accurately.

Then it becomes repetition. You’ll start just by having them do the motion.

So you do a drill, where first, they’re imagining there’s a runner on first. So they’re anticipating the runner will go. Number two, they’re in position. They’re on the balls of their feet, ready to hop up and make that throw. They aren’t coming from a full squat, they’re ready for it. Number three, they get the ball out of their glove, throwing quickly and accurately. Do this over and over.

Once they have the basic mechanics, then practice with an actual base runner on first and a batter standing in the batter’s box. The pitcher throws a pitch, the batter doesn’t swing, and the runner goes. The catcher makes the throw.

The next level is that the runner on first is instructed to go on a certain pitch (i.e. the first pitch, the fourth pitch, etc.) So now the catcher doesn’t know when he’s going to go, he has to respond to it when it happens.

The dropped strike three is pretty interesting because of the rules. It’s also very confusing in youth baseball. This is probably going to be one of the things that causes a lot of commotion on the field.

But just what is a dropped strike three? It’s basically when the catcher does not actually catch the ball. It may pop out of his glove or slide off its tips but otherwise, it’s definitely a strike three. Maybe the batter has swung or maybe it would simply be a called strike three by the umpire.

Now if that ball is dropped by the catcher, the umpire will not call the batter out in two scenarios. One, if there is no runner on first. Two, if there are already two outs. Let me explain why.

Now in a special situation, imagine that the bases are loaded and there are two outs. If the catcher drops the ball for strike three, the batter’s not out. The batter can still advance to first. All the catcher has to do to get out of the inning is step on home plate because all the runners will have to advance. If he steps on home plate before the runner from third gets there, it’s a force out and that’s the third out of the inning. If however, he throws the ball to first, not realizing that all he has to do is step on the plate, and if he makes an overthrow, one or more runs will probably score. It’s better to get the easy, quick, dependable force out at the plate in this situation, rather than risk an overthrow.

One more special situation: Let’s say there’s a runner on first with less than two outs. There’s a dropped strike three, and the runner from first is stealing second, so first base appears to be open. In this situation, the batter is out with the third strike. What counts is whether there was a runner on first at the start of the pitch. A steal attempt does not change the situation, as far as the dropped strike three rule is concerned.

It’s a little complicated but it’s pretty important that you understand it because it’s probably going to happen. And when it does, you want to know the rules by the letter. A lot of times in youth sports the umpires aren’t all familiar with the rules and sometimes they can make mistakes.